AEM – A Cold Air Intake System Can Turn the Audi A3 2.0T into a True Sports Sedan

Years ago, Audi was a quirky German automaker that built odd-looking cars nobody seemed to want. They finally figured out how to make attractive cars by the 1990s and have since evolved into a direct competitor for stalwarts like BMW and Mercedes-Benz. The Audi A3 has played a key role in their success, as it offers compact luxury car buyers a sophisticated alternative to cars like the Mercedes CLA and BMW 2-Series. To keep it competitive, the Audi A3 2.0T was redesigned for 2015, and now featured crisper lines with bespoke LED lighting, a beautiful new cabin, and a host of cutting edge options. Powering this little Autobahn-stormer is a responsive 2.0L turbocharged 4-cylinder that belts out 220-horsepower and 258 lb-ft of torque. That’s enough muscle to strike fear into many 3-Series drivers, as the little Audi catapults itself to 60 mph in well under 6-seconds. 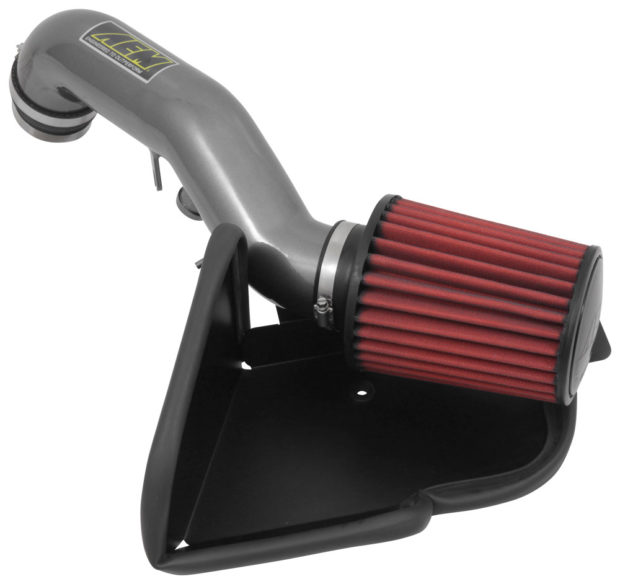 To wring V6 power from the tiny Audi 2.0L TSFI 4-cylinder, a turbo basically crams lots of air into the tiny cylinders, which creates a highly concentrated explosion that releases more energy to turn the crankshaft and propel you down the road. This pressurized air charge is generated by a sophisticated turbocharger that uses the engine’s exhaust to spin a turbine blade, which then powers a compressor. As air comes in through the air box, the compressor blades pressurize the air before shooting it into an intercooler to reduce the temperature, thereby increasing the oxygen content to create a more powerful explosion. This system works extremely well, but there are a few flaws in the stock intake system that can actually reduce the amount of power the engine can make.

The first problem that you encounter under the hood of the 2015-2016 Audi A3 2.0T is the air box. It’s designed to pull air into the system and clean it with the OE Audi air filter. Unfortunately, the hole in the air box where the air enters is rather small, which limits the volume of air right off the bat. And that Audi air filter is made from thick paper, so it constricts airflow even further. It also stores all of the dirt it removes between the folds on the surface of the filter itself. This is called ‘surface loading’, and it will absolutely strangle the airflow as that dirt builds up. The air that does make it through, will then have to bounce its way to the compressor through a plastic intake tube that is full of uneven surfaces and narrow bends. This causes the air to heat up and become turbulent. Obviously, that reduces the oxygen content and overall effectiveness of the intercooler. To address these issues, the AEM 21-802C cold air intake replaces the stock air box and filter with an oversized DryFlow air filter, surrounded by a powdercoated heat shield that seals against the underside of the hood to prevent warm engine air from entering the system. This allows significantly more air to reach the turbo, and that big AEM air filter is designed to remove up to 99% of contaminants from the air. 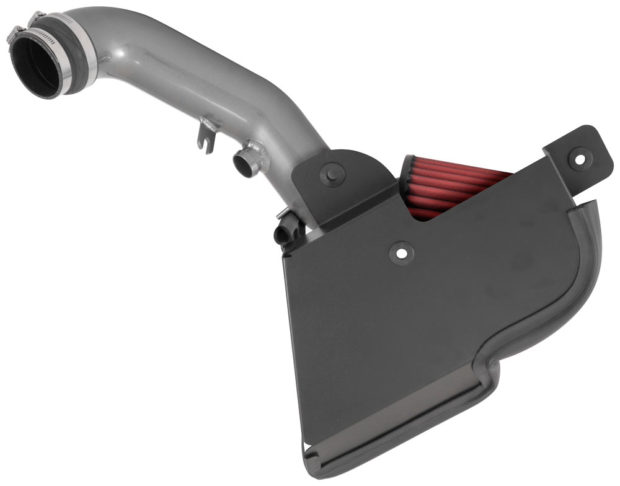 Aside from providing superior filtration and airflow, the synthetic DryFlow air filter stores the dirt that it removes, deep inside its web of three dimensional polyester fibers. This is called ‘depth loading’, and it allows airflow to continue to flow through the filter even as the dirt builds. In fact, it won’t have to be cleaned for up to 100,000 miles (depending on road conditions). And it’s backed by the AEM Lifetime Limited Warranty, so you won’t have to buy any more of those expensive Audi air filters.

Once all the dirt’s been removed, the air enters a wide diameter aluminum intake tube for a quick trip to the turbo. Unlike the stock tube, this one has wide-angle bends to reduce air turbulence. The powdercoated aluminum also lowers the air temperature by absorbing heat as the air flows through it. This allows the intercooler to cool the air even further, resulting in a higher oxygen content, and more horsepower. 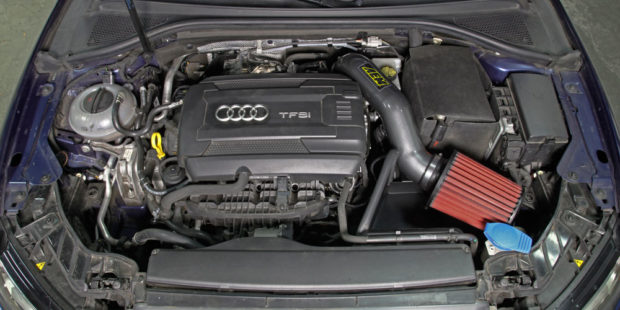 Aside from providing additional horsepower and superior engine protection, the AEM21-802C cold air intake will sharpen the throttle response because all of that power will come in at lower RPMs. So if you’re ready to boost the performance of your 2015-2016 Audi A3 2.0T or 2015-2016 Audi A3 2.0T Quattro, check out the AEM 21-802C cold air intake system.

For more information on this product, please visit AEM.